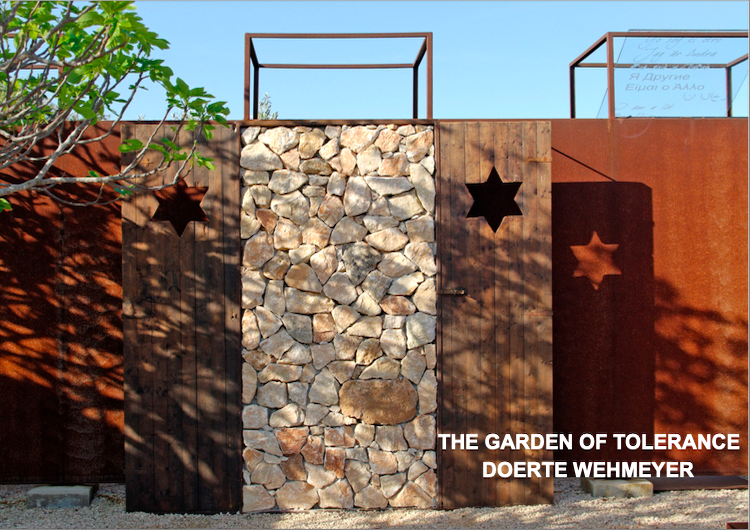 A CONCEPTUAL AND ENVIRONMENTAL ART WORK IN PROGESS

Since 2010 I have worked exclusively on this permanent exhibition in Cala Llombards, Mallorca, a wild, beautiful countryside, overlooking the ocean. Conceived as a conceptual work in progress, it is being amplified and changed every year according to political, social and economic developments worldwide. It is man’s inhumanity to man that is shown in various topics: flight and exile, oppression and slavery, personal abuse, or political corruption due to financial greed. But I also want to show personal role models, whose fight for freedom give hope for more humanity and the chance for survival.

There are four main bodies of work: The labyrinth of steel, 35m by 30m has eight walkways of 10m of length and 3.10m of height. The six patios show different installations, as does the gigantic rock cave underneath the reflecting pool. The Star of David is also a walk-in installation of 10 by 10m, constantly showing different perspectives and angles of the same „truth“, depending on the visitor’s point of view.

The whole „GARDEN OF TOLERANCE“ is a personal reminder never to forget. It is a manifestation of East/West German history, as well as a chronicle of global political conflicts. But it also appeals to the creative powers of the individual to overcome boundaries and to tear down walls. And finally, it is to honor the courage and the power of all those people who have rightfully risen against dictatorship and oppression, because THE DIGNITY OF MAN IS SACROSANCT. This is the leitmotif of the whole exhibition, welded in big steel letters to a wall of the labyrinth, throwing shadows for a better future.